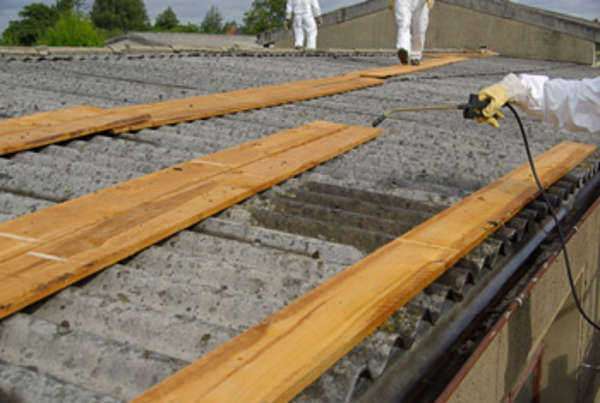 What is Crocidolite asbestos?
Crocidolite asbestos is a blue silicate mineral and is one of the most dangerous forms of asbestos.  It is also known as Riebeckite and aside from its blue color, it is also distinguishable by its sodium content and very fine fibrous strands which are easily lodged in the lungs.  It is because of the nature of this mineral that almost 20% of its miners will die of an asbestos related disease.  The blue color of Crocidolite asbestos explains its nickname as “blue asbestos,” which is in contrast to brown asbestos (Amosite) and common white asbestos (Chrysotile).  It is a brittle mineral with a somewhat silky appearance.  Other forms of this asbestos have a “wooly” look to it, reflecting its fine fibers.
The chemical formula of Crocidolite asbestos is:
[ [Na2] [(Fe2+)3 (Fe3+)2 ] [ (OH)2|Si8 O22]
This is much more complicated that other forms of asbestos, contains no magnesium ions, but shares most other common elements, with the exception of sodium, with the other five typical forms of asbestos.
What is the risk from Crocidolite asbestos in the US?
Crocidolite asbestos was not mined in the US, but was used in spray on insulation solutions, electrical wire insulation, cement sheets, tiles, fireproofing, waterproofing and even steam pipes and ovens.  Crocidolite asbestos was also used in acid battery casings.  Crocidolite asbestos has the highest temperature resistance of all forms of asbestos.  Predictably, this meant that it was used for many steam engine insulating purposes.
Crocidolite asbestos was by no means durable however and most forms that exist today are subject to breakdown where they will almost certainly release fine fibers into the air.  For this reason, as well as clear danger to miners, Crocidolite asbestos has long been out of commercial use.
How do I know if I have been sickened by Crocidolite asbestos?
The hair-like fibers of Crocidolite asbestos are well suited to catching in the lungs of unsuspecting victims.  The way the body reacts to the presence of asbestos is the root of asbestos related illness.  The first sign of potential damage from Crocidolite asbestos is decreased lung function.  Coughing up blood and fluid, with an increasingly worse cough is the first sign that a doctor should be consulted.  The embedded Crocidolite asbestos fibers turn the lungs leathery and hard.  By losing elasticity, lung capacity lowers dramatically and the illness will worsen as fluid fills the lungs and the victim suffocates.
Weight loss and weakness from oxygen deprivation are sure signs of illness from this form of asbestos.
Only a doctor’s examination and x-rays can determine the extent of exposure related illness.  An exposure relatedness illness is a prerequisite for filing litigation.
What recourse is available to workers exposed to Crocidolite asbestos?
The government will provide for Medicare payments for some individuals sickened by asbestos, especially federal employees that have contracted it while working for the government.  State worker compensation boards also have provisions to help those crippled by an asbestos related disease.  Other programs exist for federal employees, long shore and harbor workers, and Veterans.
There are no national laws to compensate those that have been exposed to asbestos.  A national trust fund, intended to compensate workers injured by asbestos, has been proposed in Congress multiple times but has never passed into law.
Those sickened by Amosite asbestos should seek a civil law remedy.  A mesothelioma or other asbestos attorney will assist you in suing the employer or prosperity owner for failing to maintain appropriate standards and safety protocol that would have protected your health.  You will be able to win compensation for medical bills and other losses through this course of action.
The asbestos lawyer will work on contingency and ensure that no fees are collected unless the case is one.  This generally works in your favor but be careful of potential scams and have a written fee arrangement to prevent exploitation or confusion.
What laws exist to protect those sickened by asbestos?
Contrary to popular belief, there is no national ban on asbestos in the US or Canada.  It has fallen out of popular demand and use due to public perceptions about the dangers involved with it however.  The Occupation Safety and Health Administration conducts studies on the effects of Asbestos exposure on workers and provides guidelines to protect workers that work with asbestos abatement from further harm.  Those involved with Crocidolite asbestos abatement procedure will be able to have their health studied, wash off residue, and receive adequate training on the more dangerous aspects of the job as well as associated health risks.

Asbestos and Your Health