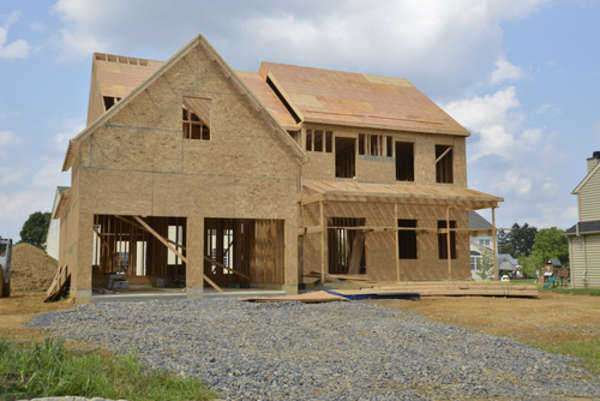 Drywall has emerged as the most common way to build walls in houses due to its standard size, fire resistance and composition.  A number of issues have cropped up of late due to quality issues with drywall and potential dangerous compounded within it.  Prior to this latest round of investigation into drywall, asbestos drywall was very common in the United States.  Asbestos drywall was praised due to its resistance to water and fire as well as its durability.  Asbestos in drywall however, has the potential to cause serious health problems for contractors, construction workers and residents of the homes that feature them.  Although modern drywall does not feature asbestos, those that remodel or otherwise disturb the tainted drywall are at risk of exposure to a potential dangerous material.
Composition of drywall
The composition of drywall is simple, as it is two sheets of paper sandwiching a layer of gypsum rock.  Prior to a 1979 ban on asbestos in building materials, asbestos was frequently used to reinforce drywall and give it fire resistant properties.  Drywall, also known as sheetrock, comes in standard sizes but can be cut with relative ease.  Most importantly, the Federal government allowed existing, asbestos tainted material that was already manufactured to be used after the ban, putting many houses built before 1986 in danger of having asbestos in their walls.
Risks of contaminated drywall
Aside from the danger posed by the asbestos drywall itself, the joint compound, which is a type of plaster used to seal drywall in place almost, certainly will contain friable asbestos.  This means it will release asbestos fibers in the air as it crumbles and it will not need much effort to do so.  Even if the asbestos in the drywall is sealed effectively, this can be a source of contamination.  This is similar to wall coatings and popcorn/acoustic ceilings.  These insulations required a mixture of asbestos and plaster and when sprayed provided quick and cheap water and weather proofing.  Those concerned about asbestos in dry wall should also consider this source of contamination.
How do I get rid of asbestos in drywall?
Amateurs should never attempt to remove asbestos on their own.  In fact, if the asbestos is safely sealed, it poses almost no risk of contamination.  It is for this reason that popcorn ceilings and other asbestos insulation can be protected by a spray able sealant.  Those that must get rid of asbestos drywall will only do so because the drywall has started to degrade.  This is known as the degradation of non-friable materials, as it is becoming friable and the asbestos fibers are exposed, therefore leeching into the surrounding environment.
When the asbestos drywall becomes friable, a professional will have to perform asbestos abatement.  Depending on the application, this will involve water treatment to prevent fibers from floating into the air, strong filtration and vacuums to prevent dust and residue and the proper disposal of the contaminated material.
What should I do if my new construction has asbestos dry wall?
This is very rare as all domestic produced sheetrock as well as drywall imported form abroad should be subject to strict inspection.  We do know however, that certain faults may escape this cursory inspection.  In the unlikely event that your structure built after 1986 has asbestos drywall, you may be able to sue for damages.  The government, through the Department of Justice is likely to press charges against the contractor as well for violating the Clean Air Act and other regulations that aim to limit asbestos exposure.
Is asbestos illegal in the US?
No, but it is heavily regulated.  As such, new constructions may not use asbestos drywall in building material and public buildings must have met certain standards for abatement.  Workers that handle asbestos must been minimum specifications, as set by the Occupation Health and Safety Administration.  The OHSA will track cases of mesothelioma and asbestosis and report on the efficiency and safety of regulations meant to protect workers.
Can I be sickened by asbestos drywall?
Yes, but only if the material has become friable.  This will only happen if the drywall is exposed or damaged.  These fibers, through prolonged exposure will cause cancers of the lungs and other organs.  Mesothelioma is the typical cancer that develops from asbestos exposure.  When suffering from this disorder, the individual’s lung will harden, will be unable to drain fluid and will cause heavy coughing.  This can be exacerbated by smoking as well as the length of exposure.  The hardening of the lungs robs them of their elasticity and the individual slowly suffocates, suffering from a host of other, related injuries.

What You Must Know About Asbestos Lung Cancer