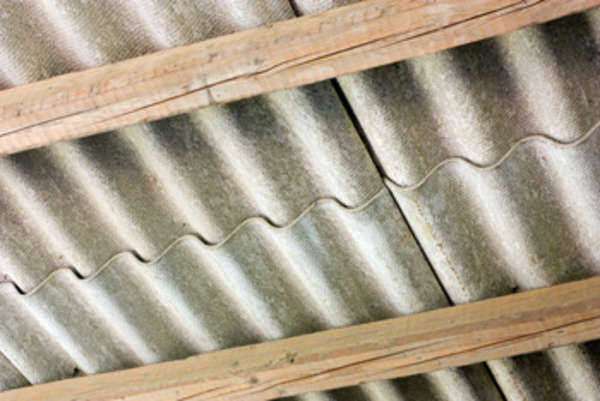 What is Amosite asbestos?
Amosite asbestos is a less common form of asbestos and is also known as brown asbestos or Grunerite.  The name derives from the origin where most of this mineral was mined, in the Asbestos Mines of South Africa.  The brown color derives from the high iron content found in this mineral, which has no magnesium present, unlike other variations of asbestos.
The chemical formula is as follows:
Fe7 Si8 O22 (OH)2
The Silicon, Oxygen and Hydrogen are common across all six types of asbestos, but Amosite is uniquely iron centric.  Like other forms of asbestos, it is fibrous and can be broken down relatively easily.  Variations in color may make the brownish color appear grey.
Dangers of Amosite asbestos
Even though this form of asbestos was not widely used, it still had some applications in the US, which includes a number of types of insulation, tiles and fireproof materials.  Amosite may also be present in some cement blocks.  Although Chrysotile asbestos is by far the most common form of asbestos used in the US, Amosite ranks a distant second.  Still, studies of workers that worked with Amosite found almost 15 – 17% have died of lung cancer as a result of exposure to Amosite.
How can I diagnose an asbestos illness early?
Asbestos largely affects the lungs and it is the body’s response to the toxic presence that signals that the exposure has sickened the exposed individual.  Decreased lung function is the first sign of potential damage from Amosite asbestos.
One will be coughing up blood and fluid and this cough increases in severity over time.  The embedded Amosite crystals in the lungs cause inflammation, which hardens the cell membrane of vital organs.  Losing elasticity, the lungs functions much in the way they would for a persistent smoker.  In fact, smoking exacerbated the risk factors for the earliest exposed to Amosite and the symptoms of their illness were confused with emphysema.
As the disease progresses, the exposed individual will lose weight, have difficulty swallowing and will experience swelling of the face and fingers.  The lack of oxygen will lead to other health issues as well.  Once an individual is struck with Amosite asbestos illness, they rapidly lose strength, become unable to work and gradually suffocate due to the condition of their lungs.
Only a doctor’s examination and x-rays can determine the extent of exposure related illness.  An exposure relatedness illness is a prerequisite for filing litigation.
What recourse is available to workers exposed to Amosite Asbestos?
The government will provide for Medicare payments for some individuals sickened by Asbestos on a case-by-case basis.  Some protected classes automatically qualify for these payments.  State worker compensation boards also have provisions to help those crippled by an asbestos related disease.  Other programs exist for federal employees, long shore and harbor workers, and Veterans.
There are no national laws to compensate those that have been exposed to asbestos.  A national trust fund, intended to compensate workers injured by asbestos, has been proposed in Congress multiple times but has never passed into law.
Criminal prosecution can be brought against property owners or employers that commit conspiracy to cover up the danger of asbestos exposure on their property.  Criminal enforcement may also be taken against those that pollute with asbestos and fail to dispose of hazardous materials adequately.  The biggest criminal prosecution of a company for asbestos pollution took place in Libby, Montana, but all employees of the company were acquitted of criminal wrongdoing.
Those sickened by Amosite asbestos should seek a civil law remedy.  A mesothelioma or other asbestos attorney will assist you in suing the employer or prosperity owner for failing to maintain appropriate standards and safety protocol that would have protected your health.  You will be able to win compensation for medical bills and other losses through this course of action.
What laws exist to protect those sickened by asbestos?
Contrary to popular belief, there is no national ban on asbestos in the US or Canada.  It has fallen out of popular demand and use due to public perceptions about the dangers involved with it however.  The Occupation Safety and Health Administration conducts studies on the effects of Asbestos exposure on workers and provides guidelines to protect workers that work with asbestos abatement from further harm.  Those involved with Amosite Asbestos abatement procedure will be able to have their health studied, wash off residue, and receive adequate training on the more dangerous aspects of the job as well as associated health risks.