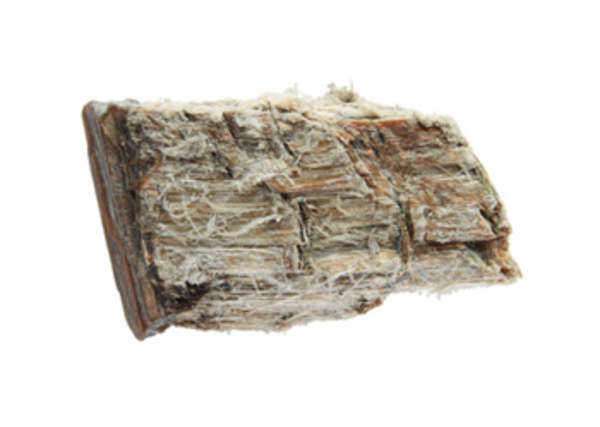 Aside from serpentine fibers, amphibole fibers are the other type of asbestos fiber and are less common in application across the United States.  Amphibole fiber is typical black or blue and carries both of the same properties as white serpentine.  The notable difference is that Amphibole fibers tend be less curly and easily woven as serpentine fiber.  You will not see amphibole fabric applications.  Asbestos is still used in many places around the world, with 2 million tons being mined annually.  The material is completely banned in Europe, Australia and Japan, but other countries, such as the USA and Canada (a major producer) simply regulate its spread and use.
What are the common uses of amphibole fibers?
Amphibole fibers are most commonly used for fireproofing and thermal insulation.  While the fibers may originate as variation of blue to brown, once processed into power they uniformly appear to range in color from white to grey.  Roofing felt is one of the most common use of amphibole fibers and one that keeps the mineral relatively intact.  Insulation is also a common use for amphibole asbestos as it will be rendered into a powder and mixed with other materials to form a heat resistant material.  Some of the highest heat resistance can be found in amphibole fibers.
What are brown amphibole fibers?
Brown amphibole fibers are associated with the Amosite form of asbestos.  Amosite is a trade name that derives from the name Asbestos Mines of South Africa.  As you can determine, it was mined almost exclusively there.  Amosite production has largely ceased from its South African location.  While in use, Amosite was used typically in ceiling tiles and vents to make them fire retardant.  Amosite is high in iron content, which is reflected in its brown color.
What are blue amphibole fibers?
Blue amphibole, also known as Crocidolite and Riebeckite is an iron and silicon rich compound that is considered a form of asbestos.  These fibers are hair like and adhere well to the lungs, making illness for those exposed to it very likely.  Blue amphibole fiber has the highest temperature resistance of all the asbestos fibers so, unlike other fibers, it has been used to insulate machinery and engines.
How do amphibole fibers sicken unsuspecting individuals?
All forms of asbestos are capable to being broken down into pieces smaller than the human eye can discern.  These are inhaled and adhere to the lining of victim’s lungs and diaphragms.  Over time, the amphibole fiber is not broken down and promotes malignant growth.  This growth continues unchecked, assisted by continued exposure or smoking.  The result is a disease similar to emphysema.  Mesothelioma and asbestosis, both disorders of the lung, result in diminished lung function.  Malignant growth, tumors or scarring of the lungs allow fluid to fill infected lungs and the victim exposed to amphibole fiber will no longer be able to breathe properly.  This will lead to a host of complications that ensure that the victim will no longer be able to live a full or productive life.  The lack of oxygen causes jaundice, weakness, blood clots and weight loss.
How can I sue for damages due to amphibole fibers?
All people are exposed to asbestos in their lifetime as it is naturally occurring.  It is exceeding certain thresholds for exposure that illness will develop.  These illnesses usually take 40 years to develop except in rare instances, such as the aftermath of the 9/11 attacks where a number of other hazards plus asbestos exposure sickened many rescue workers prematurely.
You can only sue for damages if you have an asbestos related illness.  You and the amphibole fiber lawyer will then proceed to prove that the responsible party is responsible in part or in full for you injury.  The crux of the case will rely on proving that preventable exposure sickened you, you were not informed of the potential for health risks from exposure and that the employer refused to observe due diligence in protecting their employees.  This may be in addition to criminal charges against those that pollute with asbestos.
Asbestos litigation tends to be easier to file as lawyers are willing to work on contingency and claim a portion of your settlement for legal fees.  Unless dictated by the state, you and your lawyer will need to find a fair percentage.  You will not be obligated to pay if the lawyer uses.  Be prepare to show evidence of your relationship with the other party and proof that you were present in the contaminated structure that corresponds to your current health issues.